How to Benchmark Solid-State Batteries

How to Benchmark Solid-State Batteries

Evaluating the performance of new technology can be challenging for experts and the public alike. Internal combustion engines have been around for more than a century, and by now, most people know how to compare them based on horsepower, torque, or fuel economy. But electric vehicles are relatively new at this point, and the industry still lacks a clear, simple set of benchmarks to show how EV battery technologies stack up against each other.

We are trying to change that by offering a simplified framework to evaluate battery performance. In a way, a new battery technology is like an athlete trying to qualify for the Olympics. And just like runners trying to secure their spots on the Olympic team, there are a few things that any EV battery must do well.

1. An EV battery must combine speed and endurance.

EV batteries are pushed harder than batteries in most other applications. Drivers want to floor it on the freeway onramp and fast charge when the battery is empty. However, batteries lose capacity from rough usage, and although a smartphone may only need to last for a few years, an EV battery needs to stand up to this punishment for a decade or more.

A battery’s cycle life can be thought of as the distance it has to run: hundreds of thousands of miles over many years. This is a test of its endurance. On the other hand, its power and charge rate are like the speed at which it runs that distance. For example, almost any abled person can walk 26.2 miles if they do it slowly over a couple of days, but to be an Olympic marathoner, you’ll need to cover that long distance at a very high speed. EV batteries need that same combination of speed and endurance to be useful to drivers.

How can we test for speed and endurance? Battery scientists are familiar with the term “C/3 cycling,” which means the battery is charged in three hours and then discharged at the same rate. This test attempts to approximate freeway driving and a modest recharge rate, but in the real world, drivers want to be able to cover long distances quickly, which means faster recharging times. Yet, with many new battery technologies, faster charging causes dangerous dendrites to form, which hurts the life of the battery and can even cause it to fail entirely.

We think there is a test that measures both life and power, the key elements of the battery’s ability to deliver the performance drivers want: the 1C test. The 1C test charges and discharges the battery in just an hour, three times faster than the C/3 test. But like world-class distance runners, this speed needs to be combined with endurance, so in this test, we believe batteries should also be expected to retain at least 80% of their capacity after 800 cycles.

Because the job of an EV battery is much more like a marathon than a sprint, it also needs to pack a lot more energy for the long haul. One way scientists measure this energy is with the amount of “cathode active material.” Using less material in a battery can make it seem to run better in a test, but battery engineers know that a cathode thickness of more than 3 mAh/cm2 is required in the real world.

2. An EV battery must work in real-world vehicles and conditions.

A runner might also be able to achieve faster times on a treadmill in an air-conditioned gym, but marathons are run on the streets, where conditions are not always as favorable. Similarly, certain conditions help batteries appear to perform better in a lab test. For example, solid-state batteries often perform better at temperatures above 45 °C (113 °F). We think 25-30 °C (77-86 °F), standard operating temperature for EV batteries, is a better measure of its ability to operate in the real world.

In some cases, batteries also perform better when under lots of pressure. This might work in a lab, but in a real EV battery, more pressure requires bulky hardware that makes the pack bigger and heavier. QuantumScape’s cells are tested at less than 10 atmospheres, and our cycle life tests have run at just 3.4 atmospheres of pressure, only a bit more than in a can of soda in the grocery store. We have even shown promising results from prototype cells operating with no externally applied pressure at all.

Batteries, too, have to work harder to cycle through their entire capacity. Batteries that only use a fraction of the available capacity can seem to extend cycle life, but if the battery drains all the way to zero, problems start to show up. Battery scientists refer to this as “depth of discharge” or “DoD.” Many battery technologies are tested to an easier standard, such as 80%, but we think a full 100% depth of discharge test every single cycle is needed. After all, you can only tell how a battery really performs if it doesn’t cut corners.

Battery tests like these can also be misleading if the battery has extra lithium in it. Lithium is the stuff that makes a lithium-ion battery go, so adding excess lithium to a battery can make it look like it retains capacity better. But adding extra lithium adds to the cost and can cover up fundamental problems (known in the industry as “side reactions”) that might cause the cell to consume lithium and hurt battery capacity, shortening its lifespan over the long term. This is why we think batteries with zero extra lithium are best: there’s no buffer to hide these problems.

When a runner sets a world record at the Olympics, the officials always keep close track of the tailwind. After all, if the athlete gets too much help from the surrounding conditions, the result is not a reliable measure of that athlete’s actual performance. In the same way, when looking at new battery technologies, it’s important to check every one of these elements. Otherwise, a battery that looks golden might wind up missing the podium.

QuantumScape has not only disclosed our test data but also the complete set of conditions under which those tests are run. We hope to set a new standard for clarity of test conditions and encourage the rest of the battery industry to do the same. This way, anyone will be able to understand the significance of our battery technology breakthroughs in context.

The information in this press release includes “forward-looking statements” within the meaning of Section 27A of the Securities Act and Section 21E of the Securities Exchange Act of 1934, as amended. All statements, other than statements of present or historical fact included in this press release, including, without limitation, regarding the development, timeline and performance of QuantumScape’s products and technology are forward-looking statements.

These forward-looking statements involve significant risks and uncertainties that could cause the actual results to differ materially from the expected results. Most of these factors are outside QuantumScape’s control and are difficult to predict. Information about factors that could materially affect QuantumScape is set forth under the “Risk Factors” section in QuantumScape’s most recent quarterly report on Form 10-Q filed with the Securities and Exchange Commission on July 29, 2021 and available on the SEC’s website at www.sec.gov.

Except as otherwise required by applicable law, QuantumScape disclaims any duty to update any forward-looking statements, all of which are expressly qualified by the statements in this section, to reflect events or circumstances after the date of this press release. Should underlying assumptions prove incorrect, actual results and projections could different materially from those expressed in any forward-looking statements. 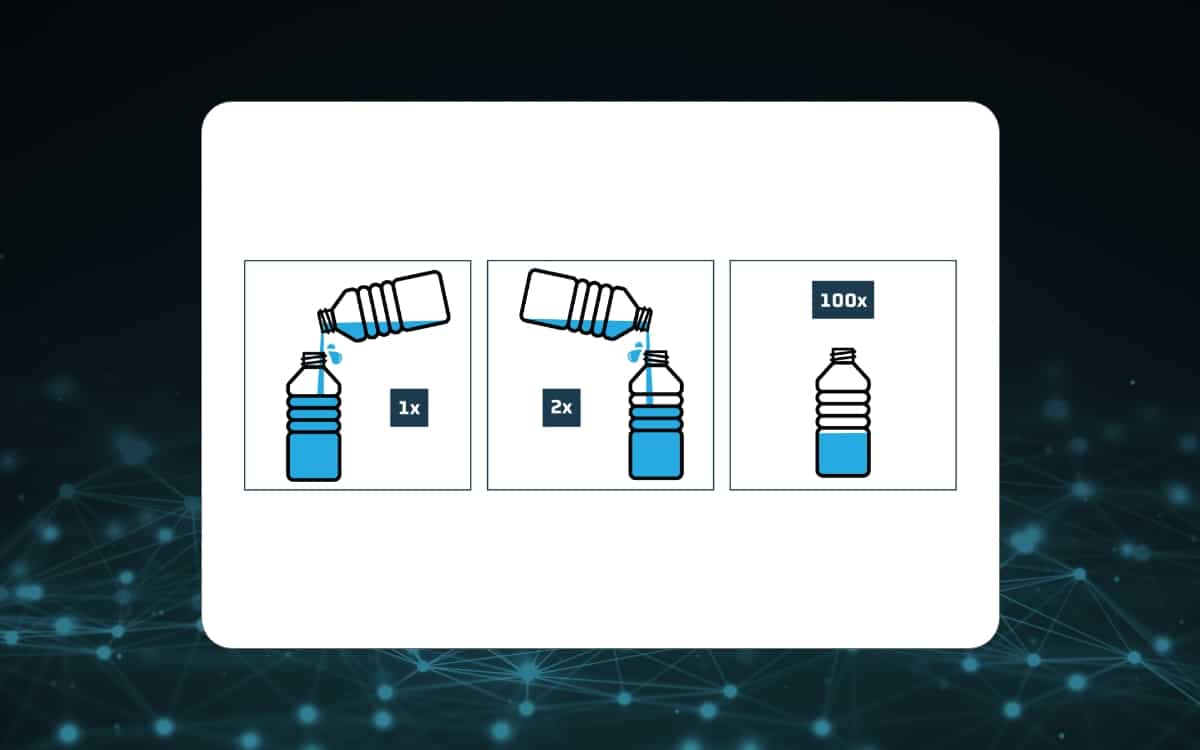 Let’s say you have a 1-liter bottle of water and you pour all of its contents into another empty 1-liter bottle and then back to the original bottle. A few drops of water spill as you do so. 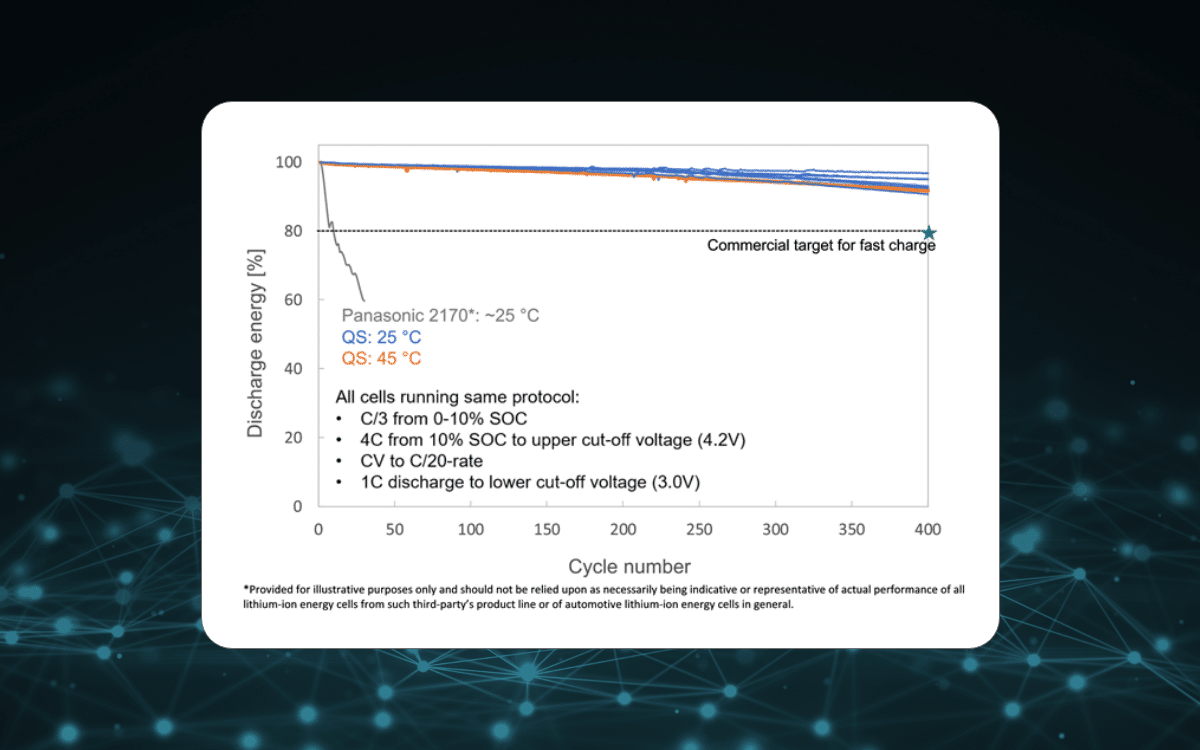 Fast charging is increasingly important to buyers of electric vehicles, but high-energy legacy lithium-ion batteries are still limited in how fast they can recharge. These limitations are largely due to fundamental constraints of battery design. QuantumScape’s technology has been designed to overcome many of these constraints, to unlock a step-change in fast-charging performance that has profound implications for EV adoption and the

Let’s say you have a 1-liter bottle of water and you pour all of its contents into another empty 1-liter bottle and then back to the original bottle. A few drops of water spill as you do so.

Fast charging is increasingly important to buyers of electric vehicles, but high-energy legacy lithium-ion batteries are still limited in how fast they can recharge. These limitations are largely due to fundamental constraints of battery design. QuantumScape’s technology has been designed to overcome many of these constraints, to unlock a step-change in fast-charging performance that has profound implications for EV adoption and the